by Tag History added on 30 October 2013, Comments Off on About John Regan and the American Legion Hall which carries his name , posted in Blog 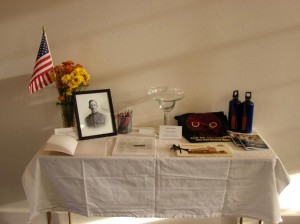 John Regan was born in Silver City on February 6, 1886, to Timothy and Rose Blackinger Regan. Timothy Regan arrived in Silver City in 1862. After several years working a variety of jobs, Timothy achieved success as a miner, selling his claims for a good profit. He invested his money in a number

of business schemes, most of which were successful. Rose Blackinger was one of several daughters of Valentine Blackinger, proprietor of the War Eagle Hotel and the Silver City Meat Market. Rose and Timothy were married in Silver City in 1878. In 1889, the Regans moved their young family to Boise where John and his older brother Will grew up, attending school at St. Teresa’s Academy before leaving Boise to attend Santa Clara College, a Jesuit college in California.

In 1904, following his graduation, John returned to Boise and entered into business, working for the Boise Artesian Hot and Cold Water Company, and managing the Overland Building (later the Eastman Building) on the corner of Eighth and Main Streets. Personable and well-liked, John was included in a list published in the Statesman in January 1908, titled “Miss or Mrs.? This Year, It’s Up to You, Girls.”

John was active in the Knights of Columbus, serving as Toastmaster at many dances and other events. He was also an active member of the Democratic Party. He preferred to play a supporting role in politics, and turned down the party’s request torun for the state legislature.

But his name turned up most often in the newspaper in reports on the activities of theAssociated Charities, a group which provided food, clothing and housing assistance to Boise’s poor. John organized balls, entertainments and other fundraisers for the group, and oversaw the distribution of funds when they were needed.

John enlisted as a private in the Idaho National Guard (Company H, 2nd Idaho Infantry) in February, 1912, receiving a lieutenant’s commission later that year. In 1915, he was commissioned a captain of the quartermaster’s company.When Idaho’s guard units were ordered to the Mexican border in 1915, John resigned his commission, and re-enlisted as a private so that he could go with his unit to the Mexican border. During his service at the border, John achieved the rank of sergeant and was again commissioned a lieutenant before returning to Boise. He was still on active service when American troops were called to France in late 1917. By this time his assignments would have kept him from serving at the front, but once more, despite the possibility of promotion if he remained where he was, John asked to be reassigned to the infantry. His request was granted and he was assigned to Company D, 128th Infantry, 32nd Division.

John’s family shared his letters with the Boise newspaper, the Idaho Statesman, as did many families whose sons were serving overseas. In March of 1918, the paper published excerpts from two of his letters. He described the facilities, “…the Idaho men are established in fine barracks equipped with electric lights and baths. The health of the men is excellent and they are all busy training.”

He went on to say “You don’t know how we enjoy The Statesman. We read everything, even to the advertisements. It sure is like a letter from home.” These letters were written before John transferred from his home company to Company D, which happened in late June or early July of 1918.

John was killed in battle in France on August 4, 1918. His mother received her last letterfrom him the same day his brother Will received a condolence letter from one of John’s friends who had been with him when he died. Official notification of his death was received a few days later. Although he was buried on the battlefield in France, in 1921, John’s body was returned to Boise and interred in the family plot in Morris Hill Cemetery.

In May of 1919, John’s family received word that he had been awarded the Distinguished Service Cross for valor.

In 1939, John Regan Post #2 of the American Legion embarked on a building program. A site was acquired at the intersection of Idaho and Fourth Streets. Construction was funded through the sale of bonds to post members, which successfully raised $10,000.00 for the project. In the spring and summer of 1939, members not only bought the bonds to fund construction, they provided most of the labor for the project,  from excavating the basement to framing and finish work.

The building, designed by Tourtellotte and Hummel with elements of Art Deco, Art Moderne and International styles, demonstrates the Boise firm’s comfort with the most current innovations in the architectural styles of the day.

Armistice Day ceremonies in 1939 began at 10:30 a.m. with a short parade of floats, veterans and marching bands through downtown Boise, which ended at the corner of Fourth and Idaho. At 11:00 a fire bell tolled and a moment of silence was observed by the crowd of hundreds. Idaho Chief Justice James Ailshie spoke, followed by Governor C. A. Bottolfsen, who dedicated the building. John Regan’s mother, Rose B. Regan, attended the ceremony. Following the dedication, the Salvation Army served lunch, “army style 1918,” according to the Idaho Statesman—including beans, doughnuts and coffee.

The American Legion owned the building for about nine years, but after World War II, the post moved to the Boise Junior College campus. BJC was more convenient for the growing membership, which included many veterans who attended college under the GI Bill. Today the post meets at the Maple Grove Grange hall.

401 West Idaho was remodeled into offices. Over the years, tenants included doctors, dentists and other health care professionals. For a short time in the 1990s, the building housed radio station KIZN FM. The main floor was remodeled in 2008 by Cole Architects, who moved from the building in 2009. In 2014, following an interior remodel and exterior restoration,  Henriksen Butler Design Group opened a Herman Miller furniture showroom in the upper level of the building. TAG Historical Research & Consulting has occupied the basement offices since 2009.