by Barbara Perry Bauer added on 21 February 2015, Comments Off on About Silos , posted in Blog

One of the most interesting aspects of our work is documenting the agricultural landscape. On a drive through any of Idaho’s rural countryside, you’ll often see the remnants of once-busy farms in abandoned barns, corrals, and hay derricks. In Ada County, which is our corner of Idaho, even as other farm buildings disappear, silos often remain, the last reminder of the days when dairy farms and orchards dotted the landscape. 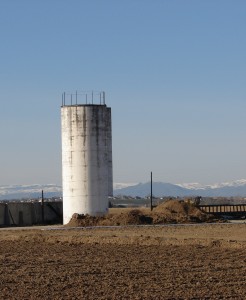 Silos are tall, usually cylindrical, air-tight chambers structures built to store and preserve of green feeds. The ability to store feed through the winter was instrumental in the growth of dairies throughout Ada County at the turn of the twentieth century. Silos evolved from horizontal structures called pit silos to vertical round structures between 1870 and 1890. They were originally built of wood or stone, dug partially or fully in to the ground and lined with materials such as wood or straw. The first vertical silos, built in the 1880s, were square and made of wood or stone. The square shape was structurally unsound and would bow outwards which allowed air pockets to develop in the corners and cause the silage to rot. During the 1890s, F.H. King of the Wisconsin State Agricultural Experiment Station developed the first successful round vertical silo constructed of two layers of horizontally placed wood boards. These early silos were constructed of vertical tongue and groove, stacked round hoops, or horizontal wooden staves, secured by steel binding rods tightened by turnbuckles. Wooden silos were prone to deterioration, so research continued into ways to improve their construction. Over time, silos were constructed of reinforced concrete, structural clay tiles, or cement staves.

Reinforced concrete was developed in the 1860s and 1870s, but it was not widely adopted until 1900. By 1902 experts were urging farmers to install concrete floors in farm buildings to help keep them clean, reduce loss of feed, and make work more efficient. In 1911 the Portland Cement Company published Concrete Silos: A Booklet of Practical Information for the Farmer and the Rural Contractor, which provided detailed information on how to construct a concrete silo. Beginning about 1915, the University of Idaho Agricultural Extension Office provided workshops in Ada County to teach farmers construction methods. Concrete blocks were available in the U.S. circa 1900 and were widely used for silo construction from 1900 through 1920. After their invention in 1905 by the S. T. Playford Company, cement staves were popular as an alternative to concrete blocks. Cement staves are masonry units about 30” long, 10” wide, and 2.5” thick. The staves are hooked together with interlocking edges, with mortar applied between the joints. The staves are reinforced by either flat or round metal bands or rods, reinforcing the silo against outward pressure. The inside of the silo was sealed by a thin layer of concrete.

After World War II, a new silo design appeared and gained acceptance.  The design, created by A.O. Smith Company of Milwaukee, Wisconsin was for a structure of fiberglass bonded to sheets of metal, which allowed it to be completely airtight. These silos, usually known by the trade name of Harvestore, could be unloaded from the bottom. Earlier silos were unloaded from the top which created problems. Harvestores were costly, but gradually began to replace earlier models and came to symbolize efficient and modern farms. 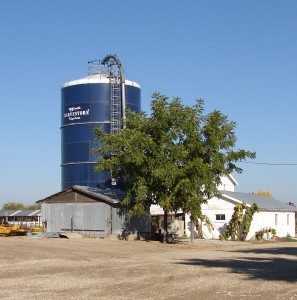 As farmland has been converted over to residential subdivisions, the silos have proven challenging. Solidly built—and difficult to demolish—some silos have been left in place and revamped as subdivision landmarks—as clock towers, water features, or other elements of a new landscape design. 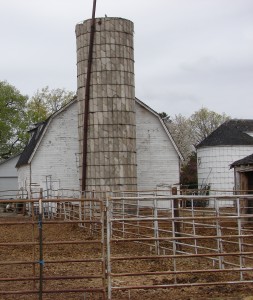