by Elizabeth Jacox added on 1 November 2015, Comments Off on Finding Fred , posted in Blog 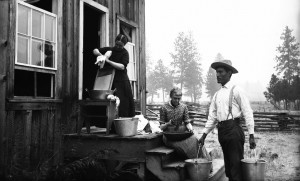 This is an updated version of an article originally published in the Idaho State Historical Society’s newsletter The Mountain Light, Winter, 1999.

The telephone rang. I answered.

“This is Fred Chenevert. I hear you’re looking for me.”

Stunned, I blurted out, “But I thought you were dead!”

It was the end of a long search for Frederick Chenevert, who donated an important manuscript to the Idaho State Historical Society (ISHS). Finding Fred was a wonderful outcome in the course of my research into the life of E. Jane Gay.

Gay visited Idaho each year from 1889 to 1892, accompanying Alice Cunningham Fletcher, the federal allotting agent, on her annual journeys to the Nez Perce Reservation. Fletcher spent her time with surveyors who were dividing the reservation up into individual parcels for members of the tribe. She gathered information about individual and familial relationships to help support claims, mitigated disputes,and tried to explain the system to those most affected (and least informed) by the process. Gay went along to run the camp, keep her friend company, and, unofficially document the process of allotment with photographs. By the time Fletcher and Gay returned to their home in Washington, DC, after their last visit to Idaho in 1892, Gay had taken several hundred photographs.

Gay used many of those images to illustrate Choup-nit-ki (With the Nez Perces), two handwritten and hand-bound volumes of letters recounting her experiences with Alice Fletcher in Idaho. In 1951, her niece, Jane Gay Dodge, donated the volumes to the Women’s Archives (now the Schlesinger Library) at Radcliffe College. For unknown reasons, a collection of Gay’s negatives—glass plate and film—was left with Kate McBeth, the Presbyterian missionary at Lapwai. After McBeth’s death in 1915, the negatives remained with her niece Mary M.“Mazie” Crawford, who succeeded her as Presbyterian missionary at Lapwai. When the mission was closed and the house where the negatives were stored was sold, the collection was acquired by historian Francis Haines, Sr. In 1963 Haines donated the negatives to the ISHS.

In 1992 I began to revise the Jane Gay collection catalog, which had been out of print for a number of years. Bill Tydeman, then state archivist, encouraged me to include a biography of E. Jane Gay. I began research on her life. The first place I found information was in Joan T. Mark’s biography of Alice Fletcher, A Stranger in Her Native Land: Alice Fletcher and the American Indians (Lincoln: University of Nebraska, 1988). Joan Mark’s information about Gay was based the reminiscences of Jane Gay Dodge—also on file at the Schlesinger—and on other sources such as Alice Fletcher’s correspondence and diaries. The Fletcher biography provided me with clues about E. Jane Gay. Especially intriguing was a note about Choup-nit-ki: “Two sets are known to exist, one in the Schlesinger Library at Radcliffe College, and the other in a private collection.” (p. 192)

No other information was given and it was years before I could follow up on the lead. Luckily in 1995 (with the help of a research fellowship from the Idaho Humanities Council) I was able to travel to Massachusetts and New Hampshire to do research. Joan Mark supported our grant application and agreed to meet me when I visited Cambridge. I made the trip with Louise Barber, who was putting together a traveling exhibit based Gay’s photos and text. Louise and I met Joan for lunch—a long lunch, since we’d made a long list of questions. Topping the list was the question—where is that other copy of Choup-nit-ki? Joan didn’t know. Years ago when the Peabody Museum received a letter from a fellow about it, no one at the museum knew what it was about. After bouncing from desk to desk the letter landed on Joan’s because it mentioned Alice Fletcher. Everyone knew that Joan was interested in Alice Fletcher. At lunch with Louise and me, Joan remembered the letter and that she had answered it. She offered to check her files and send a copy of the letter to me, if it would help.

A few days after I came home from that wonderful trip, there was a letter from Joan, with the other letter in it. In 1977 Frederick B. Chenevert of Merrimack, New Hampshire, wrote to the Peabody with information about a manuscript by Miss Gay and Miss Fletcher. Would the Peabody Museum be interested? Joan wrote back to say she’d like to know more about the manuscript. Time, chance, delayed plans—-something—-ended the correspondence. Joan never heard from Mr. Chenevert again.

Frederick Chenevert was a starting point, and in 1996, with a new tool—the Internet—I shotgunned queries about Frederick B. Chenevert in every direction. I learned that there are many Cheneverts in Massachusetts and Louisiana, but not too many anywhere else. Several Cheneverts were very helpful and suggested leads I might follow; others asked if I knew where to find their relatives. No Cheneverts turned up in New Hampshire—but I found two or three Frederick Cheneverts in Massachusetts. Somehow, I decided that Frederick B. Chenevert must be elderly. Perhaps he was a dealer in antiquarian books and manuscripts. I nearly cried when one of my scattered queries brought in a response—F. B. Chenevert, age 82, died 1980, Massachusetts…but then I thought: “Well maybe an obituary will tell me who is still out there. A Chenevert heir will know about the manuscript.”

I didn’t have an exact Massachusetts location, but I had a 1977 address in Merrimack, New Hampshire. I called the Merrimack Public Library, where a kindly librarian told me there were a couple of indexes she could check and suggested I call the Town Hall as well. The clerk in the Town Hall couldn’t help me, but suggested I write the town historian, Ruth Liberty. On an inspiration I called the town newspaper, The Village Crier. The publisher said he would publish a letter if I sent it in—then asked how things were in Idaho. He’d spent a few weeks in Mountain Home about thirty years ago.

Nothing much happened. I waited and watched, the way one does. The mailbox remained empty. The phone didn’t ring. Oh well…the next research trip on the IHC grant would take me to Washington, DC. Maybe I’d find treasure there.

Just before I flew to Washington, a letter arrived from Mrs. Liberty. She hadn’t found anything, but she wished me luck. The librarian in Merrimack sent back my donation—unwilling to take it unless she could send me information.

The week I returned from Washington, Fred called. After I recovered from the shock, I asked him how he’d found out I was looking for him. The local chief of police had called him. Somehow one of my scattershot please reached a private investigator (I still don’t know who he was). He did the legwork for me and found Fred in northern New Hampshire. Since the chief of police had called him, Fred figured he’d better call me.

That’s how the ISHS acquired a draft of E. Jane Gay’s Choup-nit-ki.

Research is a collaborative effort, even when you don’t know the collaborating is happening.

These were events of twenty years ago. Since then the project to update the Jane Gay collection catalog has continued, largely due to the efforts of Nicole Tonkovich, who I met when she traveled to Boise in 1996 to conduct research on Jane Gay’s photography for another project. Nicole, a professor of literature at the University of California in San Diego, has since published work on Jane Gay’s photography, a book on the history of the allotment of the Nez Perce Reservation, and is finalizing a book of Alice Fletcher’s diaries and correspondence from the allotment years, which will be published in 2016 by Washington State University Press. Two years ago, Nicole and her husband, Gary Hoffman, visited Boise and scanned the bulk of the negatives in the Jane Gay collection at a high resolution. Nicole, using research she had done during a sabbatical at Nez Perce National Historical Park, as well as her extensive research for the books she has published, expanded and updated the catalog descriptions for the photographs in the Gay collection. All of this information will be added to online digital collections of the Idaho State Archives (a division of the Idaho State Historical Society) in 2016.

I have continued to conduct research on the life of E. Jane Gay and an updated biography will be part of the documentation available online. I decided to to post this article as part of our celebration of the culmination of this years long, collaborative effort to bring the Jane Gay Photograph collection to a broader audience through the wonderful technology that is now available. Interested readers can now also access the valuable materials on file at the Schlesinger Library through Harvard University’s fabulous Open Collections program. See the links below.

and follow this link to see a short video preview of Where We Camped: E. Jane Gay’s Idaho Photographs, a Calendar for 2016, now available for sale on our website (click the Store tab); proceeds above production costs will be donated to the Idaho State Archives: