Our friend Gary Bettis, retired archivist/librarian, died in Portland, Oregon, on May 23. Gary was never one to demand the spotlight, and twenty years after his retirement from the Idaho State Historical Society, there may not be many folks around who recall his accomplishments. A few years ago Barbara and I nominated Gary for the Society’s Esto Perpetua Award, the criteria for which includes exemplary accomplishments in the preservation of Idaho’s historical assets; demonstrated commitment tot he education, protection, and interpretation of Idaho’s historical assets, and the integration of these assets into community life; innovative, creative, and responsible approaches to showcasing Idaho’s historic resources in the community. We were thrilled when Gary, who served as archivist at the Historical Society during times of tough budget challenges and expansive growth, was selected as a recipient of the honor. We are posting the nomination, which was written with the assistance of Keith Petersen, Blaine Bake, Alan Virta, Joe Siebel, and the late Robert Sims.

Gary, a native of Caldwell, Idaho, attended Boise Junior College after a stint in the Army following high school. He earned a B.A. in history at BJC, then went on to the University of  Denver, where he received a master’s degree in librarianship/archives and records management from the University of Denver. First employed as archivist and curator of manuscripts at the University of Washington Libraries, Gary returned to Idaho in 1970 when he was hired to fill a joint position of archivist/documents librarian at the Idaho State Historical Society and the State Library. In the 1980s  he became a full time employee of the Historical Society where he continued to serve as archivist until his retirement in 1996.

For Gary, the position of archivist was far more than a job. His passion was not just to gather material and keep in a building available for limited use. Early in his career, he embarked on several long term projects which resulted in Idaho’s comprehensive collection of historic newspapers on microfilm, the organization of the State Archives, the creation and development of the State Historical Records Advisory Board, the organization of personal and corporate collections already held by the Society, the acquisition of additional materials, and the support of a project to microfilm selected records of all 44 Idaho counties. These projects provided Idaho with a State Archives and historical research library with resources which are the equal of such facilities in many more populous states. On the way to achieving these goals, he  mentored countless student interns and volunteers, assisted in the planning and budgeting that led to teh construction of the Merle Wells Archives Storage Facility, the first phase in the construction of what is now the Idaho History Center, and helped the Historical Library & Archives (now renamed the Idaho State Archives) negotiate years of limited budgets and staff.

Throughout the 1970s and 1980s, Gary conducted research on the publication histories of as many Idaho newspapers as possible, creating master lists documenting publication spans, name changes, and even location changes, as newspaper sometimes moved from one community to another as populations changed. At the same time, Gary, accompanied by Merle Wells, Larry Jones, or members of the State Library staff, traveled the state collecting files of original newspapers for preservation microfilming. Working cooperatively with the State Library, the Society was able to set up a program to microfilm current and back files of newspapers. In 1988, the Idaho State Library won a grant from the National Endowment for the Humanities to complete the publication histories for newspapers and enter them into a national database (OCLC) where the information would be available to researchers across the United States. These steps were vital to researchers at the time and directly contributed to the wider online availability of Idaho’s historic newspapers in the 21st century.

Although legislation providing for the Society’s administration of the State Archives was passed in 1947, management of the archives and the establishment of collections policies was accomplished sporadically until 1969 when the legislature appropriated funds for a part-time archivist position. This, along with a part-time documents librarian position at the State Library, brought Gary to Boise. It marked the beginning of a slow progress toward organization of the archives, professionalization of the staff, and eventually construction of a building dedicated to the proper storage of the records.

In 1987, largely through Gary’s efforts, the Idaho State Historical Records Advisory Board (SHRAB) was established. One of the first projects of the new board was to conduct a survey ofthe state of historical records in Idaho. The survey, supported by a grant from the National Archives and Records Administration, resulted in a publication, Preserving Idaho’s Documentary Heritage, which provided recommendations to help the SHRAB create a plan and pursue several goals, all of which were geared toward improving records management practices throughout the state. One of the first goals to be achieved was the hiring of the first full-time State Archivist in 1989. The survey also helped focus the Society on the goal of an archives storage facility, which was finally achieved in 1996 when the legislature funded the construction of the Merle Wells Archival Storage Facility, now incorporated in the Idaho History Center. This process took years, and Gary did not work alone, aided by scholars, archivists, legislators and concerned citizens, but it required his dedication to establish a focus for the archives program, and his efforts to write and secure the grants that made the survey and its publication possible.

In the mid-1980s, the Utah Genealogical Society, which established a record preservation program in 1938, planned a project to film county records in Idaho. Gary assisted by helping identify records to be filmed and providing contact information and negotiating access to the records for the UGS team. In return for his assistance, UGS, agreed to film a broader range of records and a longer span of dates in selected instances. This is how, several years before the current explosion of historical records online, researchers at the Idaho Historical Society had access to county records miles from the actual county seats.

These are just a few examples of Gary’s lasting legacy to scholars of Idaho history. While achieving these goals, any one of which would have been a major accomplishment, he continued to oversee projects to organize and describe the manuscript, map, and other special collections of the Historical Society. He provided internship opportunities for students from Boise State, College of Idaho, and other Idaho colleges and universities, as well as Idaho students who attended out-of-state schools and returned home for winter and summer breaks. He encouraged and supported Library & Archives staff in pursuing continuing education.

The Esto Perpetua nomination form requests attachments of newspaper coverage, publications, or other documentation to further support the nomination. Gary does not seek the spotlight. He has always been one who works quietly in the background, accomplishing amazing things. For supporting documentation, we refer you tot he availability of historical records at the State Historical Society, the crowded microfilm readers where rolls of newspapers on microfilm and county records are used every day by thousands of researchers every year. The SHRAB, which still exists in its advisory capacity and as a funding source for projects that add more opportunities for research in Idaho history. We hope that you will agree with us that M. Gary Bettis exemplifies the qualities of the Esto Perpetua award.

In 1996, when Gary retired from the State Historical Society, his friends and colleagues from the Society and the State library arranged for a sweet gum tree to be planted in his honor in Boise’s Municipal Park, through a program offered by the Boise City Department of Parks & Recreation. A plaque placed at the foot of the tree reads:

“You planted a legacy.”

The lettering on the plaque is worn and faded now, but the tree has grown tall. 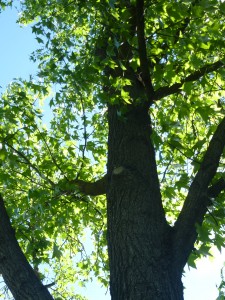 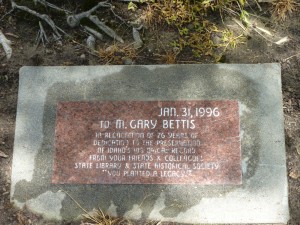